A Balloon Ride, Lions, and Petting a Rhino 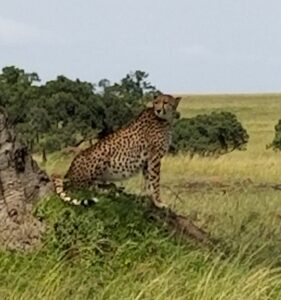 Cheetah posing for us

Yesterday was a very long day. We got up at 4:00 AM to leave for a hot air balloon ride over the Mara Conservancy, which is right next to the Maasi Mara. This was my first hot air balloon ride, and it did not disappoint. Our pilot was Carlos, who is originally from Barcelona and has been piloting balloons for over 15 years. He made us feel very safe. We drifted at about 30-50 feet most of the time, high enough to clear the acacia trees but low enough to have a superb view of the landscape and wildlife. We saw quite a few hyenas, gazelles, giraffes, topi (a type of antelope), a couple of vultures, and there were quite a few songbirds welcoming the sun. Excitingly, when we landed the basket tipped sideways so the we were on our backs and had to scoot out that way.

Then we had breakfast out in the bush not far from the landing site. After that we were off to the day’s first game drive. 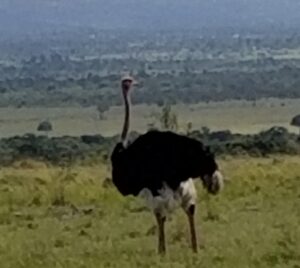 On that trip, we saw a Cheetah posing (seemingly!) for us at the base of an acacia tree, and then FINALLY a male lion. First one. He was sleeping off a meal of hippo (we saw the bones) and could care less about our presence. Also on that drive we saw a big troupe of olive baboons, three ostriches, and a large herd of zebras having a pool party at a watering hole. I got some great video of that.

On the afternoon game drive, we had our best view yet of some black-backed jackals, which are very dog-like. The big surprise was a visit to a place (it didn’t have a name that I ever saw) where there were two very docile white rhinos and their human friends. We got lots of close-up pictures and even got to pet one of them, who is named Kofi Annan. He was busy grazing and pretty much ignored us altogether, Back on the road after that, we saw a LOT more lions. Including an adorable appx 1 year old male lion cub. Later we saw a BIG male who was probably his dad. When the adult males face you straight on, it’s easy to see where the inspiration for Maasi Lion Masks came from. 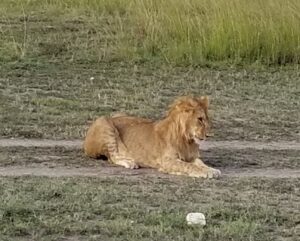 At the end, we were treated to another “surprise” bonfire party way up a slope with an incredible view of the valley.

Today we proceed on to Tanzania, ending up at our camp at the Serengeti. Fortunately, they allowed us to sleep in this morning so everyone is blessedly rested.