From Ama Tierra to Osa Mountain 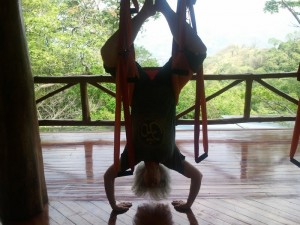 We woke to bird calls at 5:30 AM in our lovely room at Ama Tierra. Due to the 2 hour time change, that actually felt like sleeping in. Since breakfast was not available until 7:30, Mick made coffee and we finished off the pineapple empanadas we bought yesterday. We also had some delicious almonds & cranberries glazed with honey & sea salt. While we snacked, we watched the last half of the Peaceful Warrior. Our host had lent it to us to watch in our room, and we only managed to get halfway through it last night. It’s an incredible story.

Real breakfast (or 2nd breakfast, as Mick fondly called it), was eggs and fruit and gallo pinto and toast. I was very proud of myself for being able to successfully ask our waitress for more fruit for Mick in Spanish. Then Jill (the owner at Ama Tierra) took us for a tour of the yoga center, which is REALLY lovely. I got to try the aerial yoga equipment that is currently there, as you can see from the photo with this post.

When we got back to the main lobby, they were playing cumbia and merengue music to as a prelude to the dance they are having there tonight. As a result, I got turned on to a new Cumbia band! The DJ was amused by my description of pobrecita Americans who do not know how to shake their hips.

Then it was time to leave. We got directions from our hosts on how to continue west to get to the highway we needed to find. Unfortunately, their step-by-step neglected to mention a critical item, which resulted in a few extremely tense heart-stopping moments as we had to back about 100 yards down a steep, rock-studded dirt road. Our directions had been to proceed on a particular road until it came to a T, then turn right. What was missing was that before the T, the main road would bear off to the left, and we needed to follow that instead of continuing straight on. Oops! It became clear we were on the wrong track, because they would have mentioned it if the road was that bad. Thankfully, we managed to get ourselves straightened out & only lost about 15 minutes. It’s probably a good thing that the mistake was so obviously wrong, or we would have gotten really lost.

After that, our drive was mostly pleasant, except for another 15 minute dirt stretch with steep switchbacks. Iguanas apparently like sunning themselves on the roads here – we saw several that scooted out of the way as we approached.

Lunch was a plata tipica at a little restaurant by the road, very yummy. Then we found our way through all the little beach towns down to our destination, Osa Mountain Village. As the name suggests, it is up in the mountains that hug the coastline here. It is at about 2000 feet, and that climb is accomplished in 7 km of yes, more very steep winding switchbacks of bumpy dirt road.

Here at OMV, we are staying in a beautifully furnished rental unit. It feels very American in terms of the appliances, TV, furniture, etc. The pool and bar compare well to those at any tropical resort. But the views and the wildlife are really spectacular. I am listening right now to a chorus of insects, some familiar and some not, with a waterfall whispering in the background.

Spread the love
This entry was posted in Travel and tagged Costa Rica. Bookmark the permalink.