It is astonishingly beautiful here. The word “Serengeti” is a Maasai word meaning “Endless Plains” and they do just go on and on and on…. Leaving the camp this morning for today’s game drive, we saw more hyrax, including babies, a red-billed hornbill, and a Klipspringer, which is a little antelope that stands and walks on the front edge of its hooves so it looks like it’s tiptoeing around.

As we drove, we saw these amazing little communal spiders who build a giant web together between the tress and the ground, and all hang out in it waiting for prey. You really don’t notice the huge webs until you drive past and they catch the sunlight. Each spider has its own little section. We also saw weaver bird nests, which hang down from the tree branches like funny-looking fruit and have their opening at the bottom. They tend to cluster a lot of nests in a single tree.

In my last post, I included a picture of wild morning glories. They were a beautiful and unexpected grace note scattered across the savannah. Of course we saw many animals and birds, including: wildebeests, zebras, both Thompson’s and Grant’s gazelles, wart hogs, ostriches, hawks, Nubian vultures, Crested Francolins, a Martial Eagle (which are very strong – they can take a small lion cub), hyenas, buffalo, hartebeests, topi (a colorful species of antelope), Ground Hornbills, elephants, and giraffes. But the highlight of the drive was our visit to Pride Rock, where the name refers to the pride of lions that has claimed it as their own. How many can you spot in this picture? And there were several more scattered around on the other side and on the surrounding ground. All snoozing in the sun, just like the cats they are. 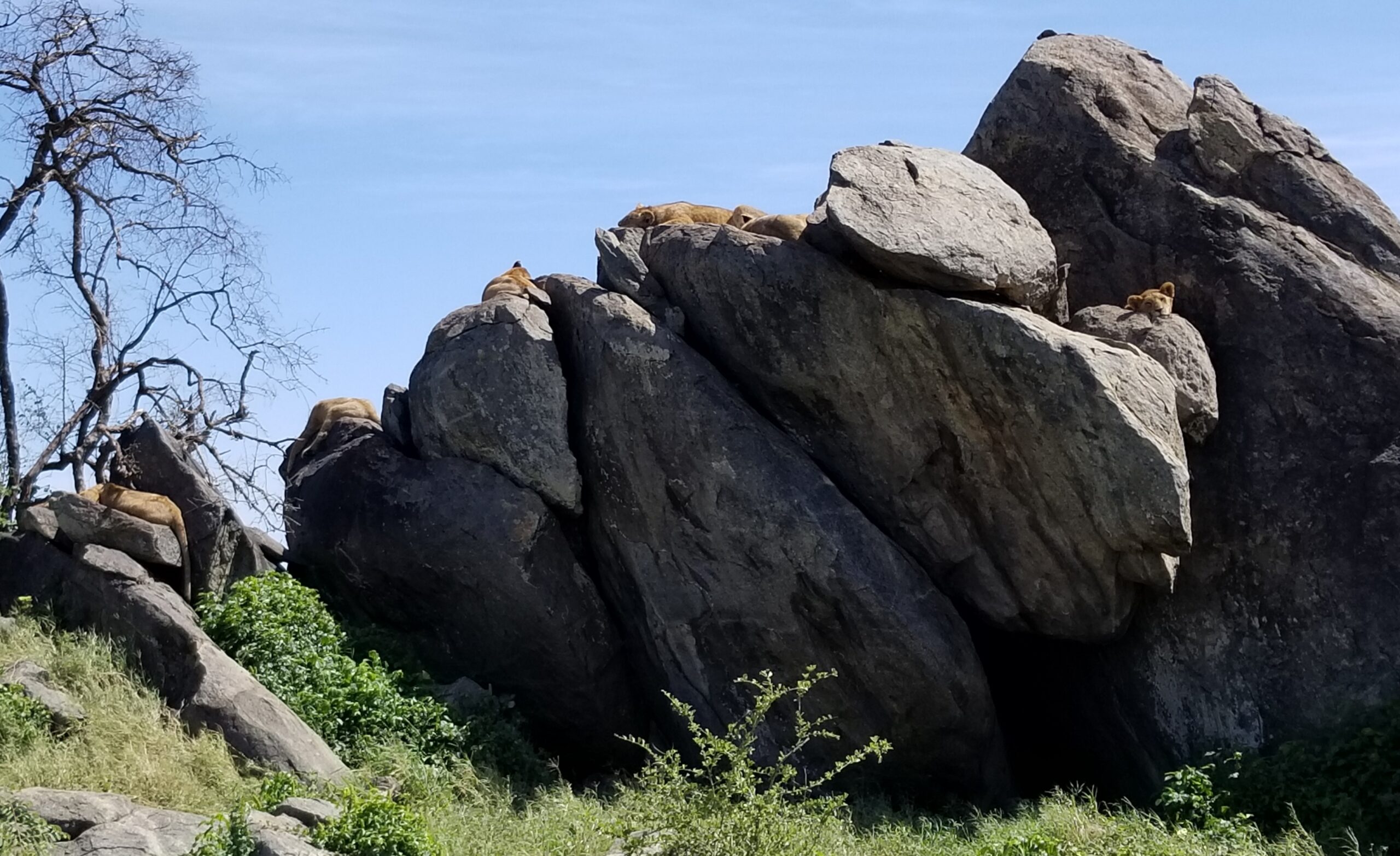 After spending some time with the lions, all three of our vehicles met up at the “Bone Tree” (my name for it) where three different skulls (lion, zebra, and mystery carnivore) and some animal’s spine were there for us to look at. We had some snacks and then moved on. As we went back past Pride Rock, we spotted one of the lionesses stalking a herd of zebras that were a few hundred yards away. She was downwind from them, like a good hunter, and kept flattening herself down into the tall grass every time they looked her way. Elphas, who is our guide for the whole trip, said they did not see her, because they did not spook and run, but they were moving away and she finally gave up. He also pointed out that she is hungry because you could see how her belly was sunken in. So we all got a little nervous when she walked right past our stopped vehicle on her way back to Pride Rock. He urgently told us, “DON’T MOVE” several times. And we did not, until after she had passed.

From there, we worked our leisurely way back to camp. Random observations:

The last animals we saw as we approached camp were a herd of elephants, including several females with tiny babies, less than a year old. The babies were so adorable! One of them actually waved his little ears at us just like mama.

We had one more outing after that, but I’ll save that story for another post.