It’s nearing the end of our wonderful adventure, and each day has brought amazing new sights and experiences. Today was no exception. We left early to get to the Ngorongoro Caldera, which is a very old, very large volcanic crater here in Tanzania. The road in goes up and over the surrounding ridge, and then down into the crater. Because the altitude is so high, the temp was quite chilly. Fun fact: in Tanzania, Spanish moss growing on trees indicates that the area regularly gets (relatively) cold temperatures, exactly the opposite of what we see in the US. 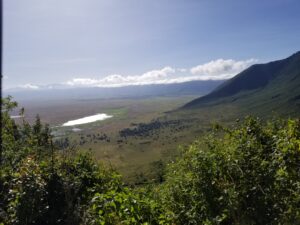 View of the Ngorongoro caldera

This photo was taken just a little way down the inside of the crater descent. That lake looks small, doesn’t it? It’s actually huge. It’s salt water even though all its tributaries are fresh water, due to mineral content in the soil. As we got to the bottom of the descent, a troupe of baboons was crossing the road, and several of them decided that the warm hood of our vehicle was a great place to hang out! Fortunately, none of them came in through the roof, which happens sometimes. After a few minutes they moved on. 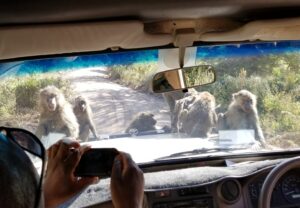 Baboons on the hood of our vehicle

We drove quite a ways on the crater floor and part way around the lake and saw many familiar animals from other parts of our safari. So I’ll mostly share here the ones that were unique to today’s trip. There were a LOT of birds down here. We saw a pied crow being harassed by smaller birds, spoonbills, gray herons, two different species of teals, pelicans, flamingos, black-winged stilts, Egyptian geese, barn swallows, an Augur buzzard, a male ostrich and his family of lady ostriches, a kite, egrets, yellow-billed storks, a Hamerkop, and quite a few Sacred ibises. 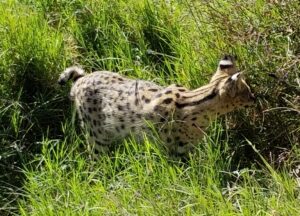 Serval in the Ngorongoro crater

On the animal side, we saw most of the usual suspects, but new to us was a serval, which is a cat that is a little bigger than a house cat. It has lovely markings, as you can see in this photo. It came very close to our vehicle. We also saw Golden jackals.

One sad thing regards a lovely yellow flower that grows extensively down there. It’s actually invasive, and hardly any of the herd animals like to eat it. Efforts to eradicate it are limited to mowing the plants before they flower. 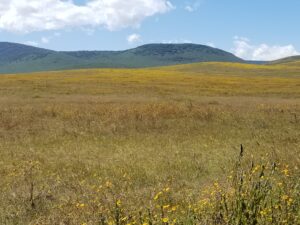