If you go anywhere in Quepos/Manual Antonio area, you should take the tour at Villa Vanilla Spice Plantation. It was fascinating and delicious. During various parts of it, we ate samples of : 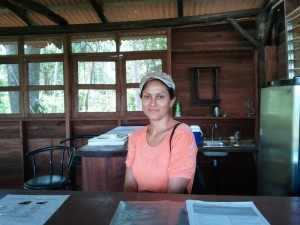 Our guide’s name was Giselle, and she did a wonderful job of describing everything and answering all our questions.

I was fascinated by their farming methods: all organic & sustainable. They interplant the spice plants with flowers & fruits to draw insects away so they don’t need pesticides. They burn the leftover cinnamon wood to heat the drying ovens in the rainy season. All the bio waste (hulls, leaves, animal manure, etc.) is composted to use on the plants.

I also learned a lot about vanilla plants, cacao, allspice, cinnamon, and pepper. 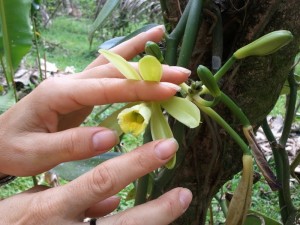 This is a vanilla flower – the blooms are open for only a few hours in the early morning, and they are hand- pollinated. The workers go around every morning and look for open flowers, pollinate them, and mark the plant. That’s how they know when to harvest the pods.

Did you know that Ceylon Cinnamon is the superior variety, with health benefits that Cassia Cinnamon does not have? Guess which one is what we normally find on our stores – that’s right, NOT Ceylon.

Also, I had no idea that cacao flowers and resulting pods grow directly out of the trunk & branches of the tree. like this: 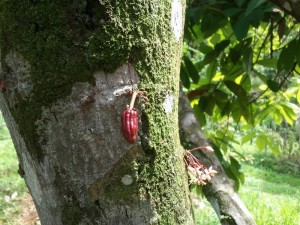 In the center of the photo is a tiny cacao pod, below it and to the right are flowers. How crazy is that?

So all in all, this is the most interesting part of our vacation so far. You can bet I bought wonderful things in the Spice Shop at the end! I can’t wait to get home and make cinnamon tea.