Everything Old is New Again

Today we revisited some of our favorite places in this part of San José (Avenida Central and Barrio Amón), ate, and shopped. Not necessarily in that order. After breakfast in our hotel, we walked over to Casa 927. We thought they opened at 9am. We were wrong, but someone was there and went ahead and opened early for us. Really! They have a ton of beautiful and creative clothes, jewelry, hair ornaments, belts, bags, etc. What’s great is that it’s an artist co-op, so each one has his/her space and you might be able to meet the person who made the items you are admiring.

Mick wanted to walk over to Chietón Morén before we bought anything at Casa 927 so we did. Chietón Morén works with the indigenous peoples of Costa Rica, and brings their hand-crafted items to market. ALL the proceeds go back to the people who made them – the space for the shop & a small museum is donated, and all the staff there are volunteers. It was interesting and they have many beautiful and practical items. Mick would have bought a hat if they’d had one that fit him.

Next we walked over to a Mercado that runs in a tent tunnel between Avenida 2 and Avenida Central and went through it. We had each bought shirts there last year – Mick was wearing his today (the Pura Vida frog). When we got close to that booth, they flagged him down and wanted to know where he got that shirt (aqui!) and when. They had another great frog shirt (Beware the Frog), it is perfect for him.

By then it was 11:00, so we sat in the Plaza de la Democracia until another of our favorite restaurants – Tin Jo – opened for lunch. Asian food, completely delicious. After lunch we found our way back to Casa 927, where I bought things both for me and as gifts.

We returned to our room after that, and I relaxed & read while Mick went back to the cigar bar. I finished my book King Rat by China Miéville. If you are not familiar with him, he is an excellent writer. 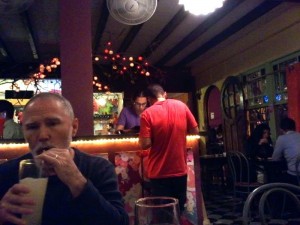 For dinner, we went to a restaurant called Café de los Deseos, knowing nothing about it except that it is a few blocks from our hotel. It turns out that it is a very “happening” sort of place, bustling with young people who appeared to be mostly in their 20s. The food was good, but here’s the kicker: the tables and walls were decorated in 1960’s op-art style art, there were posters on the wall from American movies and musicians like Metropolis, Pulp Fiction, AC/DC, Ben Harper. And the music they were playing was all old American music from OUR youth – The Ghetto (Donny Hathaway), Spooky (Classics IV), Son of a Preacher Man (Dusty Springfield), My World is Empty Without You (The Supremes), some older blues that we couldn’t identify, and a woman who might have been Etta James. There is a very deep irony in that we traveled thousands of miles to a foreign country for THAT.

1 Response to Everything Old is New Again