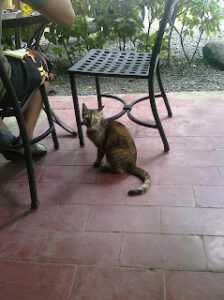 Low key today. Woke up around 7:30, had breakfast, strolled around to see what was open & checked out the various stores. It never ceases to amaze me that two stores will have the same merchandise for wildly different prices. There was a skirt I found that I liked – one store had it for $33, and two blocks down I found the exact same skirt for $20. Guess which one I got? Also a great t-shirt with koi on it, and some sandals.There was a cat hanging out at the open-air cafe where we had lunch, friendly but really more interested in whatever food she could coax from the diners.

After lunch we walked around a little more, then it was back to the hotel. We went swimming in the ocean and the hotel , then just relaxed on the lounge chairs by the pool for a while. We decided to walk down to a restaurant called FTs for dinner, another open-air place. When we got there, they had the Sharks/Canucks game on! Unfortunately, we sat at a table right underneath a light, and were bombarded by little black beetles during our whole meal. Yuck.

Tomorrow, I might go to a Pilates class, it depends in part on how much it costs. The schedule was on the door of the studio but not the price.